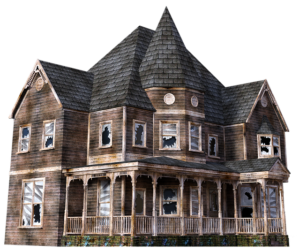 I walked the dog after dinner last night and when it was time to return home, I decided to take a shortcut through the woods. On the edge of the wood stands a deserted house. When I walked past the house I heard a strange noise.

Suddenly my dog started behaving strange. He ran towards the house and naturally I followed. Once I was inside the house, I heard a really loud bang. The door closed behind me. I went further into the house searching for my dog when abruptly two boys (probably twins), approached me. ”Lisa, come play with us”, the twins said. I was startled but mostly scared. How did they find out my name? I will tell you guys (my readers) about it later.

I told them I didn’t want to play with them. But they started screaming and crying and throwing a tantrum. Before I could process what was going on, they grabbed my hand, their grip was way too strong for kids. They dragged me all the way up to the roof of the house and jumped. “See, isn’t this fun Lisa“, they yelled.

After waking up from my unconsciousness I found myself in a weird room. The floor was the sky. I was sitting on the sky. But as weird as it may sound the roof was the ocean. Above my head there were fishes and other sea cretures swimming upside down. It looked as though the whole ocean would fall on my head.

I wondered if I was already dead, that’s when I saw my dog. I quickly ran over to him for a hugg. “OUCH”, my dog bit me. When I looked at my dog in disbelieve , I saw a monster in its eyes. My dog smiled at me with his semi-human face, as if he were about to get rid of a pestering fly. All of a sudden, the “floor” under my feet had disappeared. I fell to the ground headfirst. The pain was agonizing. On the floor there was a huge mess of intestines and blood. I don’t get it, why didn’t I die.

At that moment I really wished to die. I couldn’t stand the pain in my head no longer. I looked up to God for help but what I saw instead was a giant cloud that looked like a face. It was really detailed. This couldn’t be a coincidence. When the face noticed me it frowned at me.

Next thing I saw a hand. Was is trying to squash me? I tried to run but the hand was so big I didn’t see a change in its size. I prepared for the worst but I didn’t feel anything. The hand was so big I went threw its pores, all the way to its bloodsystem. But it was so hot in the blood, that I had to watch my body melting away – not to mention I was drowning! I disappeared, I was gone.

I woke up in a gaming chair with VR glasses on my head. “how are you doing player:129191”. I am going to explain what’s going on here. This universe and the place you call earth is a virtual world. Right now all of the inhabitants of earth are on level 1. There are more people who reached higher levels they managed to go beyond earth. All the crazy things I experienced was because I stumbled upon a portal. And that’s probably why the twins knew my name. So basically everyone reading this is a player.

I left a riddle in this story see if you can solve it.

by an anonymous author, 9c

I walked the dog after dinner last night and when it was time to return home, I decided to take a shortcut through the woods. On the edge of the wood stands a deserted house. When I walked past the house I heard a strange noise.

I was interested in what was inside the house. I searched for a window to look inside. I found a window and looked inside. It was dark, very dark. Suddenly, my dog started to bark. I couldn´t stop him. After a while I remembered a Tiktok-Video from a dog trainer who had said that some dogs bark when they see ghosts and that dogs can see other things than humans.

I was afraid. I ran back home very fast. Next morning I watched the news on TV. The newscaster said that a person was killed last night in the woods near our house. I recognized the house. I was the house from yesterday. Suddenly, the door squeaked. And my dog Susi started to bark again.